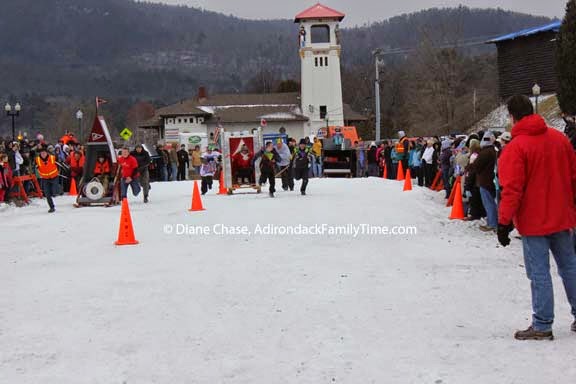 Just mentioning an outhouse and the potty humor starts pouring out. So before I go into a complete downward spiral, I’d like to say “only in the Adirondacks,” but that wouldn’t be true. Across the nation there are numerous wheeled “soapbox derby” races with themed outhouses pushed by costumed racers pitted against their decorated neighbor. The difference from those races and the upcoming Lake George Winter Carnival Outhouse Races is the ice.   The first 2015 Adirondack outhouse race takes place February 7, Saturday, at 12:30 pm on Lake George. There is an alternate location if the ice is considered unsafe. Registration begins at 10 am at Duffy’s Tavern (518-668-5323.) According to Adirondack Studios’ owner Tom Lloyd what started as a quirky competition for his custom design and fabrication firm has grown to be a competitive race. Eight years ago the Adirondack Studios design team took a break from its large-scale projects for the Broadway stage and other elements of the en
Post a Comment
Read more
More posts