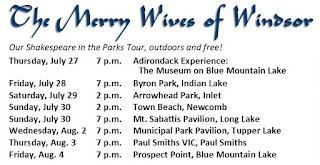 The Adirondack Lakes Center for the Arts 's annual Adirondack Lakes Summer Theatre Festival kicked off this summer with Lee Blessings' A Walk in the Woods and now continues with the annual free Shakespeare in the Park. Jayson Grigsby as Sir John Falstaff in the Adirondack Lakes Center for the Arts' The Merry Wives of Windsor With a mixture of professional and regional actors, this year's Shakespearean pick The Merry Wives of Windsor is a hilarious romp for all ages. Set outside, the actors utilize their surrounding and a simple stage setting to create the atmosphere of various areas of Windsor, England. Director Anne Vaccaro adapted Shakespeare's play to be under an hour with no intermission. Vaccaro makes this version of The Merry Wives of Windsor a fast-paced, fun version that has the audience laughing in their seats. The language is simplified from what I remember of this play, but she kept true to the form. The ensemble cast were fast on their feet
Post a Comment
Read more 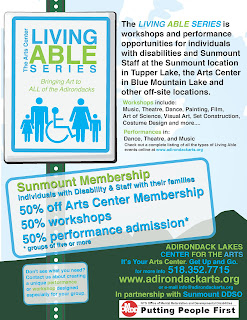 All performances of HONK are open to the public and will be held at the Long Lake Central School Auditorium. The Saturday, April 13 performance will take place at 7 pm while the Sunday, April 14 performance will take place at 2 pm. Tickets are available for $10 general admission.  This year’s performance of HONK is loosely based on Hans Christian Andersen's "The Ugly Duckling.” Watch while the strange-looking duckling “Ugly” goes on a quest to find his real mother after being lured away by a sneaky Cat. Ugly encounters some hardship but also encounters friendship and love.   Previous performances for the LIVING ABLE Series have been A Year With Frog and Toad , Rockin’ To OZ and You’re A Good Man, Charlie Brown . The LIVING ABLE SERIES provides  workshops and performance  opportunities for individuals  with disabilities and Sunmount  Staff at the Sunmount location  in Tupper Lake, the Arts Center  in Blue Mountain Lake and  other off-site locations.
Post a Comment
Read more
More posts