Showing posts with the label fall hunting
Show all 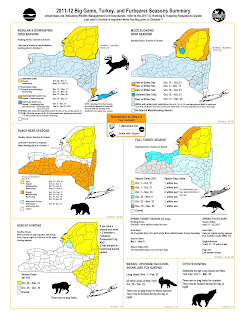 Just a reminder when spring Turkey hunting season starts in the northern Adirondacks. This type of hunting season does not have the intensity of Big Game season, that takes place in the fall. Spring Turkey Youth Hunt is April 21-23, 2012 eligible to youth 12-15 years of age. Even though my family does not hunt, I always feel it is a good idea to know who I am sharing the woods with. Have a wonderful, active time! Early Bear: September 19 - October 17 Archery Big Game: September 27 – October 23 Black Powder Big Game: October 17-23 Regular/Rifle Big Game: October 24– December 6 Late Black powder (limited DMU’s): December 7 – 13 Turkey: Spring: May 1 -31, Fall: October 1 – 23  Other small game seasons: (Squirrel and cottontail rabbit) open on October 1 but some WMU’s open earlier than others.   The same goes for Grouse hunting which starts as early as September 20 in parts of the Adirondacks. Waterfowl seasons vary by region and a separate stamp is needed to hunt w
Post a Comment
Read more
More posts