Showing posts with the label Raquette Lake
Show all 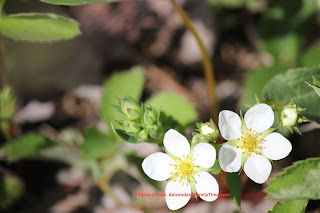 Strawberry flowers Though we have had more rain than sun over the last few days, strawberries are starting to ripen and Pick-Your-Own fields are planning on opening to the public over the next couple of weeks.  Festivals are set to gesture in summer with all things strawberry. Rulf’s Orchard in Peru is holding their 4th annual Strawberry Festival on June 27 with a bounce house, vendors, strawberry shortcake eating contest and wagon rides to the U-Pick patch.  Raquette Lake is whipping up fresh strawberry shortcake while Crown Point will host its annual celebration of those delicious red berries.  According to Shannon Rulf their strawberry fields opened last Sunday for U-Pick. During the festival She expects more people to come to take part in all the activities, not come to pick huge quantities of berries so she is also offering a special quart-size price for people taking the Country Dream Farm free horse and wagon ride to the fields.  "This year we are
Post a Comment
Read more

- June 25, 2012
In 1889, William West Durant established one such town on Long Point of Raquette Lake . He built a post office there and a general store, naming the town Durant , NY . A year later, he responded to the needs of the Catholics in the area by donating the land, the materials and the money to build a Catholic Church just down the shore from the general store.  Designed by the J.C. Cady Company of New York City , the church was completed in 1890 by Hammond and Mosher, a contracting company in Saratoga Springs . William West Durant  entitled the church St. William's. The following year, the Franciscan Friars, Order of Friars Conventual, began administering to the needs of the parishioners of St. William's. As transportation technology advanced and the railroad arrived within the blue line, the water-locked town of Durant , NY (having changed its name to Raquette lake soon after its creation)  relocated to its present location, where the railroad spur from New York City ended. Still
Post a Comment
Read more
More posts