S honen Knife in Concert   Mt. Sabattis Pavilion in Long Lake Saturday July 28 Doors open at 5:00 p.m. Bring a picnic and a lawn chair. $15, Kids under 12 are free.  The all-girl Japanese Pop-Punk Band Shonen Knife recently completed  their 30th anniversary across North America and now will take a tour stop in Long Lake.  Formed in Osaka, Japan the band's music is heavily influenced by the Ramones and The Beach Boys.  Shonen Knife is the most internationally recognized name in Japanese Rock.  This project is sponsored by The Town of Long Lake and is made possible with public funds from the NYS Council on the Arts Decentralization Re-grant Program. In Hamilton County, the Decentralization Program is administered by the Adirondack Lakes Center for the Arts, located in Blue Mountain Lake.
Post a Comment
Read more

Movies Come Back To Berkeley Green I did not know much about Saranac Lake’s movie theatre history until my husband spoke of going to see a film in Saranac Lake. In addition to Vaudeville shows and Hollywood location shoots, Saranac Lake was once the home to three movie theatres and a drive-in at various times in its vast history. The Colonial Theatre, once located at 55 Broadway, opened in 1912 with seating for 500. It was later converted to a grocery in the mid 20s with the building eventually demolished in 1974. Community Bank stands in its location now. According to the Historic Saranac Lake Wiki page, the Pontiac Theatre was built at 13 Broadway in 1917 and at one time housed the largest movie screen in Northern New York. The Pontiac burned in 1978 and is currently a parking lot.    The Berkeley Theatre opened in the late 80s near the old Pontiac site and operated until the year 2000 in the basement of Corvo Restaurant, which is now Bear Essentials Apparel.
Post a Comment
Read more 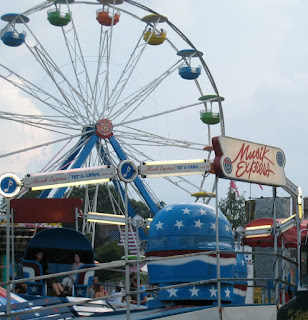 By Diane Chase For the 3rd year Amusements of America will be coming to Tupper Lake between stops at the Saratoga and Franklin County Fair. In case anyone is wondering about these traveling fairs, Saratoga County Fair (held in Ballston Spa) is one of the oldest fairs in New York State and still organized by the Saratoga Agricultural Society while the Franklin County Fair (held in Malone) is run by the Franklin County Agricultural Society and has continued to provide this annual event for over 150 years. Now the Tupper Lake Lions Club has gotten into the carnival game. From July 25-29 at the Tupper Lake Municipal Park there will be an assortment of carnival rides for children of all ages, from rides for small children to something the parents can share like the Ferris wheel, merry-go-round or the “dizzy dragon.” I can’t tell you what the last one is because when I spoke with Maurice from Amusements of America it sounded like he was on the Ferris Wheel at Saratoga County Fa
Post a Comment
Read more
More posts