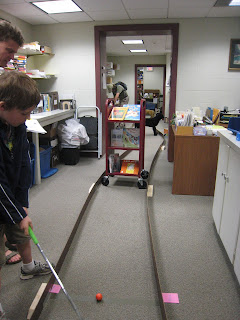 ©Diane Chase, Adirondack Family Time Taking a break from skiing the bumps? Here are a few inside golfing activities that can provide a different type of winter activity.
1 comment
Read more

- December 12, 2011
"Even as wisdom often comes from the mouths of babes, so does it often come from the mouths of old people. The golden rule is to test everything in the light of reason and experience, no matter from where it comes." Gandhi Okay people f you haven't given much thought to the drinking straw, think again. In February 2011, Fourth grader, Milo Cress of Vermont learned that more than 500 million disposable plastic straws are used each day in just the United States alone. Cress is now on a quest to rid the world of drinking straws. When Cress discovered so many straws were being discarded every day, he pledged to stop using disposable straws and now asks the rest of us to follow suit. BeStrawFree.org realizes that some people have to use straws but just asks that we rethink the amount of waste we generate with each straw we take. According to the BeStrawFree.org site, 500 million straws would fill more than 127 school buses daily.  Picture that amount of drinking stra
Post a Comment
Read more
More posts