Showing posts with the label freestyle ski
Show all 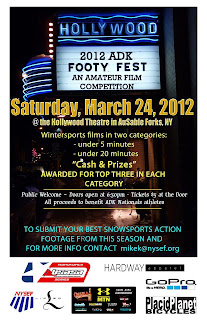 This second annual winter-sports film  competition for the   Adirondack region supports the freestyle and snowboard subculture while also acting as a fundraiser for athletes trying to make Nationals.   1) The film festival will take place at the   Hollywood Theatre   in AuSable Forks this Saturday, March 24 at 6:30 p.m. 2)  All tickets are $5 3) This is an amateur film competition  4) Cash and prizes for top three finishers in 2 categories: under 5 minutes and under 20 minutes 5)  Other prizes will be awarded from   PlacidPlanet Bicycles   and   Hardway Apparel , GoPro,  6) A ll funds will be used to support the   United States of America Snowboard Associations Adirondack   (USASA ADK) athletes at Nationals at Copper Mountain, CO.
2 comments
Read more
More posts