Showing posts with the label adirondack chair
Show all 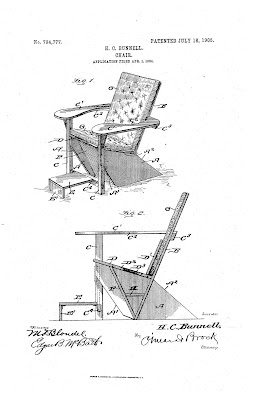 Where was the Adirondack Chair invented?  Westport NY resident, Thomas Lee  invented a porch chair to house his large group of guest, friends and relatives. He used one plank of hemlock to design a chair with a slanted back and wide arm rests to  hold drinks and food.    Though invented by Thomas Lee, it was Harry C. Bunnell a local Westport NY woodworker that began producing the chairs at his Westport shop.  Bunnell received a patent July 18, 1905 with the   "object of this invention is a chair of the bungalow type adapted for use on porches, lawns, at camps and also adapted to be converted into an invalid's chair. " The major difference between the modern Adirondack Chair and the Westport Chair is the Adirondack Chair has a slated back while the Westport Chair uses one piece of wood.
Post a Comment
Read more
More posts