FREE Activity: Learn to Tie A Bowline: Print out this KNOT TYING worksheet and fun facts 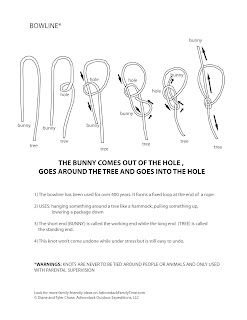 Print out this KNOT TYING worksheet and fun facts Learn to Tie Knots: Bowline I always learned to tie a bowline with the "bunny around the tree" method. It seems to be a time honored system as now that is how my Adirondack kids have learned to tie this handy bowline knot. Enjoy! "THE BUNNY COMES OUT OF THE HOLE , GOES AROUND THE TREE AND GOES INTO THE HOLE" FUN FACTS:  1) The bowline has been used for over 400 years. It forms a xed loop at the end of a rope. 2) USES: hanging something around a tree like a hammock, pulling something up, lowering a package down 3) The short end (BUNNY) is called the working end while the long end (TREE) is called the standing end. 4) This knot won’t come undone while under stress but is still easy to undo. *WARNINGS: KNOTS ARE NEVER TO BE TIED AROUND PEOPLE OR ANIMALS AND ONLY USED WITH PARENTAL SUPERVISION Look for more family-friendly ideas on AdirondackFamilyTime.com © Diane and Tyler
Post a Comment
Read more 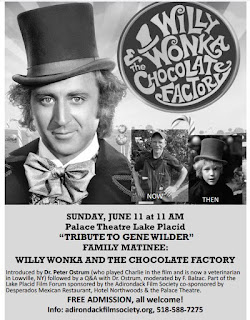 Meet the original Charlie Bucket at the Lake Placid Film Forum Gene Wilder Tribute Set For Lake Placid Film Forum Family Matinee The Adirondack Film Society opens this weekend with its annual Lake Placid Film Forum, June 7-11, 2017 with a mixture of international flavor, educational aspects, and a nod to its hometown Winter Olympic roots. Last night’s opening brought out locals and visitors alike to the Palace Theater for a free screening of “Eagle Eddy.”  With an impressive lineup of new and encore films, The Lake Placid Film Forum provides a distinctive international flavor to this wet, Adirondack spring.   With directors and producers coming as far afield as Moscow and Havana, one unique Adirondack aspect will be in the panel discussion at the Sunday free showing on the original version of “Willie Wonka and the Chocolate Factory.”  With a nod to Gene Wilder, the Adirondack Film Society has procured the original Charlie Bucket, Dr. Peter Ostrum, to join the pan
Post a Comment
Read more 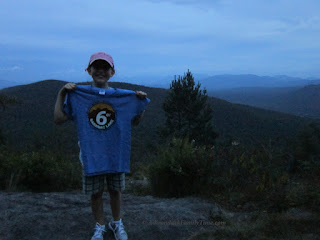 #280 Saranac Lake 6er on the summit of Haystack, after summiting McKenzie. #MountainMonday Challenge Accepted!  Saranac Lake 6er  View from Scarface- Saranac Lake 6er I’m slowly working on becoming an High Peaks 46er. I’m a 25er, though I admire all my friends that have climbed all 46 Adirondack peaks over 4,000’ including my husband, my in-laws and my daughter’s “fairy godmother."  I tend to go back to climb the peaks I enjoy like Wright, Algonquin and Marcy. I realize there are many different ways to appreciate the outdoors and one is to embrace the challenge of climbing the peaks.  Summit of Ampersand, a Saranac Lake 6er The Saranac Lake 6er program provides a different sort of test. The Village of Saranac Lake initiated the program to introduce people to the area’s lesser-known peaks. I was surprised when my daughter came home interested in becoming a 6er. My family have climbed the six peaks (St. Regis, Baker Mt, Scarface, McKenzie,
Post a Comment
Read more
More posts