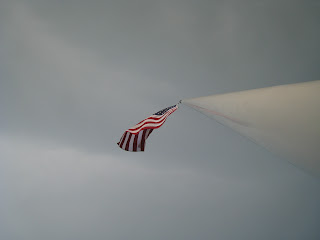 United States of America Flag Facts 1) On June 14,1777 the US  Congress adopted the Stars and Stripes as the national flag 2) 1912:  President William Taft issued an executive order dictating the proportions for the flag and placement of the stars. Before that it was left up to the flag maker. 3) 1916: President Woodrow Wilson issued the proclamation establishing June 14 as Flag Day, though it is not a federal holiday many states do celebrate it as a state holiday. 4)  Betsy Ross, credited with sewing the nation’s first flag, was an upholsterer not a seamstress  5)  The U.S. flag has been changed 27 times since 1777. The 50-star flag used today was created in July 4, 1960 when Hawaii became the 50th state. That version has been used the longest.  6) 1949: President Harry Truman signed into law June 14 as national Flag Day. © Diane Chase, author of Adirondack Family Activities™ guidebook series.   Adirondack Family Time: Tri-Lakes and High Peaks (Your Four-Season Guide
Post a Comment
Read more

Make Your Own Hummingbird Food Nectar

Make your hummingbird food recipe solution,  1 part white, granulated sugar 4 parts water  closely approximates the concentrations found in the nectar of wildflowers they prefer. To make a little over 1 cup of hummingbird nectar recipe solution (normally enough to fill a standard feeder) follow the below directions: Make sure your feeder is cleaned thoroughly before adding new solution. Boil 1 cup of water.  Stir 1/4 cup of white granulated sugar into the 1 cup of heated water. Stir until sugar dissolves. Cool, fill your hummingbird feeder, and serve! Nectar can be stored in the refrigerator for 2 weeks.
Post a Comment
Read more

Hummingbird Nest from Egg to Flight

- June 11, 2012
FRIDAYS AT THE LAKE Free live music at Lake George's Shepard Park June 15 Max Creek (The Classic Jam Band) They had so much fun at their 41st Anniversary Weekend in Lake George that they're coming back to offer a free show to their local fans!  Max Creek is a living, breathing historical study in a hugely significant yet too-often overlooked American subculture: the jam band. Thousands of shows, dozens of recordings and an army of fiercely loyal fans has made them one of the most beloved acts on both the festival and club live music circuits. June 29 Jeff Bujak Solo electronica dance music. This Northampton, MA based keyboardist has designed a new style within electronica. His music falls into a large pool of  instrumental dance genres, lands on one and leaps to the next while he wails on his keyboards to create something truly moving, smart and original. Bujack handcrafts his own beats and loops, then samples and performs his half improv/ half composed pieces live to cr
Post a Comment
Read more
More posts