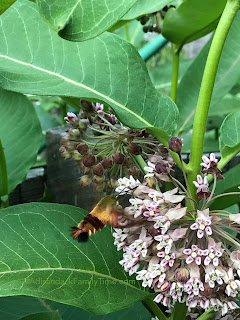 Hummingbird Moth on Milkweed Is it a bird or is it a butterfly? A hummingbird moth can be found around your Adirondack garden throughout the summer months. Some shared characteristics between the two similarly named creatures make people mistakenly identify this moth for the more popular hummingbird. Differences 1) Stating the obvious here, but one is a moth and one is a bird. 2) A hummingbird moth's tail is shaped like a fan 3)  The moth has a long tongue that rolls up under its chin called a proboscis 4) A hummingbird moth is classified as a  Lepidoptera 5) Hummingbird moths have antennae Similarities between hummingbird and hummingbird moth 1) Both can remain suspended in the air as well as flying sideways and backwards 2) Both feed off of nectar   3) Both emit a similar humming sound   Hummingbird moth 1) In the United Kingdom, hummingbird moths are referred to as Bee Hawk moth 2) Part of the Sphingidae family, one of the fastest flying insects in the w
Post a Comment
Read more
More posts