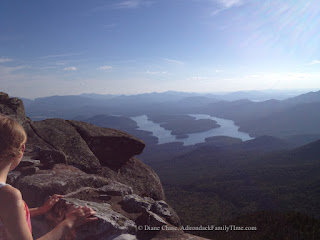 There is a 360º view at the summit of Whiteface Mountain, including this view of Lake Placid.  The last time my car climbed Whiteface Mountain, the 5th highest peak in the Adirondacks,  I was with a friend who had climbed not only all 46 High Peaks but also many other mountains around the world. The view had been socked in and we were to meet a large group congregating at the summit to celebrate three new 46ers . Visibility was zero that day at the summit and I spent my time making sure my children didn’t plunge off the slippery slope into the clouds.   Whiteface Memorial Veterans Highway Toll Road winds around for 5 miles before reaching the summit.  Years later and my car has managed to do twice what I haven’t accomplished once, it climbed to the summit of the 4,867' tall Whiteface Mountain.  This time I check the Whiteface website to make sure my visitors and I are going to be able to see the 360-degree Adirondack panorama. It states 70 miles of visibility.
Post a Comment
Read more
More posts