Showing posts with the label autumn recipe
Show all

Apple Season - Make Your Own (DIY) Apple Chips and Apple Vinegar! What to do with leftover apple scraps, peels and cores 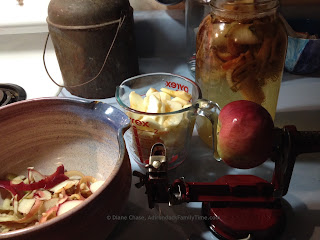 I love those dried apple chips I find in the store. Those expensive, dried, apple chips that usually have only 4 slices of apple coated in sugar, oil and cinnamon jostling around in a mostly empty bag. For years now I've also been drinking  Apple Cider Vinegar  every day. All the health benefits, aside, making vinegar takes absolutely no time of effort. That is my type of cooking.   Our family usually composts our apple bits. Those peels and cores are usually designated to the bin, feeding our red wiggler worms.  After an overzealous bout of apple picking, I thought there had to be a way to reuse some or part of the apples in a different way. Now of course, I'm not the first person to think this way. Martha Stewart usually beats everyone to the punch. Since I'm a staff of one and she has a whole research team, I thought I could come up with an easier way of making homemade apple chips with less sugar and in less time. After you've peeled and cored the appl
Post a Comment
Read more
More posts