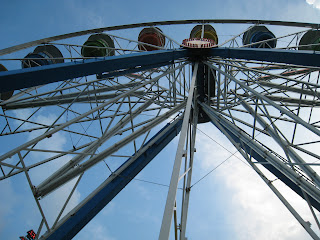 By Diane Chase For the 2 nd  year Amusements of America will be coming to Tupper Lake between stops at the Saratoga and Franklin County Fair. In case anyone is wondering about these traveling fairs, Saratoga County Fair (held in Ballston Spa) is one of the oldest fairs in New York State and still organized by the Saratoga Agricultural Society while the Franklin County Fair (held in Malone) is run by the Franklin County Agricultural Society and has continued to provide this annual event for over 150 years. Now the Tupper Lake Lions Club has gotten into the carnival game. From July 27-31 at the Tupper Lake Municipal Park there will be an assortment of carnival rides for children of all ages, from rides for small children to something the parents can share like the Ferris wheel, merry-go-round or the “dizzy dragon.” I can’t tell you what the last one is because when I spoke with Maurice from Amusements of America it sounded like he was on the Ferris Wheel at Saratoga County Fair. He ass
Post a Comment
Read more

By Diane Chase There is always a lot of conversation about invasive species in the Adirondack Park. These prolific plants, animals and insect crowd out native plants. Purple Loosestrife is a hardy perennial that was brought to North American by settlers as early as the 1800s as a  medicinal plant to treat such ailments as ulcers, diarrhea, and dysentery.   Without a natural predator the plant chokes out native wetland plants (especially cattails) How does it affect other plants?  1) Its rootball grows in a tangled mass that chokes out other native plants. 2) A single plant can produce as many as 3 million tiny seeds. 3) It is aggressive and grows by root and seed making it nearly impossible to eradicate. What eats Purple Loosetrife?  The golden loosestrife beetle (Galerucella pusilla) is being introduced into the Adirondack Park in hopes to help control this wetland invasive. Thankfully extensive research shows that the beetle will not become a different issue to deal wit
1 comment
Read more
More posts