A Bit of Mother’s Day History : A Day of Peace 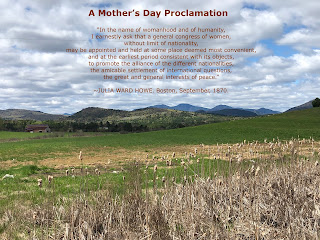 I’ve always found Mother’s Day to be a wonderful tradition. It doesn’t have to be about celebrating a woman. The origin of Mother's Day was not intended to be about self, but about service.

We can celebrate Mother Nature or admire a person who has provided support. We can take a moment of silence and honor those no longer here. It is a momentary break from our busy schedules to remember a mentor or a mother figure, whether by birth or by choice.

Days dedicated to mothers have been traced back to a variety of sources. The ancient Greeks honored Rhea, the mother of the gods. Christians honor Mary, the mother of Christ. Mothering Sunday, the fourth Sunday of Lent, apparently evolved to be a time when people working away from their homes were expected to return to their “mother” church. The holiday became a day reuniting mothers with their children.

Ann Maria Reeves Jarvis is the inspiration behind the modern Mother’s Day celebration. In 1858, she organized Mother’s Day Work Clubs to help improve sanitation and worker safety in Appalachian West Virginia. During the Civil War the clubs remained neutral to provide medical care for both Union and Confederate soldiers. After the war Jarvis created a Mothers’ Friendship Day to bring together soldiers and neighbors of different political beliefs to help ease any tension.

In 1872 Julia Ward Howe (author of  “The Battle Hymn of the Republic”) organized a Mother’s Day of Peace. It is suggested that she encouraged  a day where mothers could rally for peace. Originally held on June 2, Howe envisioned a day of activism.

The current holiday was conceived in 1907 when Philadelphia schoolteacher Anna Jarvis, Ann’s daughter, honored her mother’s good works during a memorial service.  She continued the yearly tradition by passing out red and pink carnations to signify those people with living mothers and white carnations to honor those mothers who had passed away. Jarvis petitioned influential businessmen and legislators to form a national Mother’s Day.  Finally in 1914, President Woodrow Wilson proclaimed the second Sunday in May, the anniversary of her mother’s death, as a national holiday to celebrate all mothers.

To Jarvis’s dismay, the holiday quickly became a vehicle for commercialization. In an attempt to maintain her mother’s good works, Jarvis attempted to lobby businesses to donate a percentage of the Mother’s Day profits back to women and children in need. She was unsuccessful. It is said that she regretted forming the holiday and even petitioned the courts to have it disbanded.

I am not suggesting that current Mother’s Day traditions be dissolved. I rather like the idea of breakfast in bed and all the niceties. I look forward to it. I also embrace the original Mother’s Day concept of a day of peace, of friendship, and good deeds. Happy Mother’s Day.

Appeal to Womanhood Throughout the World
"Again, in the sight of the Christian world, have the skill and power of two great nations exhausted themselves in mutual murder. Again have the sacred questions of international justice been committed to the fatal mediation of military weapons. In this day of progress, in this century of light, the ambition of rulers has been allowed to barter the dear interests of domestic life for the bloody exchanges of the battle field. Thus men have done. Thus men will do. But women need no longer be made a party to proceedings which fill the globe with grief and horror. Despite the assumptions of physical force, the mother has a sacred and commanding word to say to the sons who owe their life to her suffering. That word should now be heard, and answered to as never before.

Arise, then, Christian women of this day ! Arise, all women who have hearts, Whether your baptism be that of water or of tears ! Say firmly : We will not have great questions decided by irrelevant agencies. Our husbands shall not come to us, reeking with carnage, for caresses and applause. Our sons shall not be taken from us to unlearn all that we have been able to teach them of charity, mercy and patience. We, women of one country, will be too tender of those of another country, to allow our sons to be trained to injure theirs. From the bosom of the devastated earth a voice goes up with our own. It says: Disarm, disarm! The sword of murder is not the balance of justice. Blood does not wipe out dishonor, nor violence vindicate possession. As men have often forsaken the plough and the anvil at the summons of war, let women now leave all that may be left of home for a great and earnest day of council.
Let them meet first, as women, to bewail and commemorate the dead. Let them then solemnly take council with each other as to the means whereby the great human family can live in peace, man as the brother of man, each bearing after his own kind the sacred impress, not of Caesar, but of God.
In the name of womanhood and of humanity, I earnestly ask that a general congress of women, without limit of nationality, may be appointed and held at some place deemed most convenient, and at the earliest period consistent with its objects, to promote the alliance of the different nationalities, the amicable settlement of international questions, the great and general interests of peace."
— Julia Ward Howe