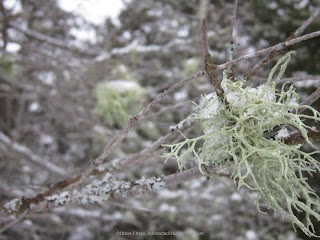 The pale green lichen in the Usnea "ooze-ne-a" family, also known as Old Man’s Beard, can easily be spied hanging in tree branches around the Adirondacks. I

Did you know?
• lichens are not really plants but a blending of two separate organisms: fungus and algae.
• It is commonly known as a tree moss or beard moss.
• It is sometimes confused with Spanish moss, which is not found in the Adirondacks.

• Usnea was used a respiratory antibiotic since 1600 B.C 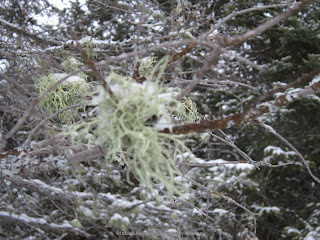 • Important in ancient Greek and Chinese medicine
• Has anti-microbial properties so can be directly applied to an open wound to stave off infection.
• Make a tea or tincture out of it to treat lung infections.
• Has been used to combat tuberculosis in studies.
Identify
•A white, stretchy, thin cord can be found when you pull the Old Man's Beard gently apart.
© Diane Chase is the author of the Adirondack Family Activities™ guidebook series, Adirondack Family Time™, which is available online or bookstores/museums/sporting good stores. Diane is currently working on the third guidebook in the four-book series of Adirondack Family Activities™.
healing herbs lichen nature detective