(SARANAC LAKE)  The comedy Vanya and Sonia and Masha and Spike is as long in name as it is in laughs. Directed by Shawna Mefferd Kelty, this captivating show is set in present time Bucks County where middle-aged siblings Vanya and Sonia bicker over coffee, the definition of an orchard and the next stage of their lives. Having taken care of their now deceased parents and put their own lives on hold while their movie star sibling, Masha, supports them, Vanya and Sonia brood as if characters in a Chekhov play for which they are all named.

The action is slow-starting as gentle Vanya (Christopher Leifheit) quietly sips his coffee. His motions are so controlled, from his tightly pressed together legs to his hands resting on his lap. He never loses his temper even when his more volatile adopted sister Sonia (Allison Studdiford) throws a coffee cup and bemoans her stagnant life choices with such statements as “I am the wild turkey,” a nod to Chekhov’s famous line in “The Seagull.” Leifheit’s Vanya is the perfect straight man to Studdiford’s more manic Sonia.

Costume Designer Kent Streed cements the image that Vanya and Sonia have given up on life with their dowdy, plain mismatched clothes. Studdiford’s frumpy Sonia is desperate, bemoaning her adopted status.  Studdiford easily slingshots from woeful plain Jane to zany partygoer, drawing gasps and laughs from the crowd. .

Christina Eskridge, most recently seen in “Tintypes,” electrifies the stage as the soothsayer housekeeper Cassandra. Eskridge agitates as she spouts impending doom to the stoic Vanya and gloomy Sonia about their famous sister Masha, the owner of their house.

Cassandra’s predictions come true as the vibrant Masha, played by Laura-Jean Schwartau-Swanson, sweeps in as the self-absorbed, unlucky in love actress. Veteran Pendragon actor Swanson breathes life into this insecure character with five failed marriages under her belt who is desperate to flaunt her May-December romance with her latest fling, an out of work actor named Spike. Swanson’s Masha freezes any perceived competition with a glance and slowly gains more depth until finally deserving our sympathy as the breadwinner for her two siblings.

Dylan Duffy plays Spike with such abandonment that it is easy to believe that he is as dim-witted as the character he plays. At one point the audience starts to clap for Spike’s reverse striptease and a few ladies to my left are whispering that they hadn’t realized that the play came with a “Magic Mike” bonus.

Masha tries to control her world by means of a themed group costume for the neighbor’s party, casting herself as Disney’s Snow White and her family as dwarfs. Masha becomes unrailed when Sonia decides to attend the party as the Evil Queen, but only as portrayed by Dame Maggie Smith accepting her Oscar. 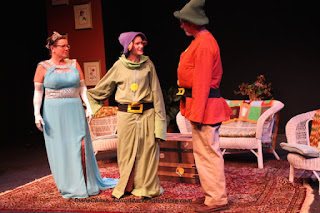 Masha imagines that Spike is interested in the young neighbor, Nina, brilliantly played with wide-eyed innocence by Laura Menzie. But as an aspiring actress Nina is only awestruck by Masha.  Nina encourages Vanya to pursue his own dream as a writer so she willingly performs his play for his siblings.

Leifheit’s Vanya is wonderful to watch as he unfolds from the passive straight man for Act I to a pouncing tiger when Spike rudely answers his phone during Nina’s performance. His rant touches on all that is wrong with modern society from losing touch to the need for instant access. Mixed into this neurotic family stew are more zany predictions from Eskridge’s voodoo practicing Cassandra, knucklehead moments from Spike and fresh-faced enthusiasm from Menzie’s Nina. All the while, the siblings endure all that is crazy, funny and endearing about being part of a family.

There is a bit of language so the play is not recommended for the very young. Older teens, high school students and of course all adults will love this comedy that pulls and twists at family ties.

A prior knowledge of Anton Chekhov’s work is not a prerequisite to understanding or thoroughly enjoying the play. If you are a Chekhov aficionado, come for the laughs and all the various nods to “The Cherry Orchard, “The Seagull,” “Uncle Vanya” and “Three Sisters.”