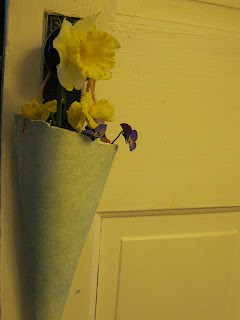 Craft: Make A May Day Basket:


The tradition is for children to place a simple bouquet of flowers on the door of a friend or neighbor. What I enjoy is it gives children a chance to surprise adults and do something kind without costing a penny.

The "basket" can be as simple as a used tin can or glass jar with wire or twine for hanging.
The kids can go outside and fill the jar with lovely spring flowers. If you aren't in an area with fresh flowers about, make some tissue flowers for everyone to enjoy!

History:
There are many traditions surrounding the first of May. Beltane was the name given to this time, on the Celtic calendar. The name originates from the Celtic god, Bel - the 'bright one', and the Gaelic word 'teine' meaning fire, hence the name 'bealttainn', meaning 'bright fire'.

May Day is the beginning of the 'lighted half' of the year when the Sun begins to set later in the evening symbolizing the arrival of  Beltane and summer.

Nature is in bloom and the earth is full of life. May Day has been celebrated for hundreds of years in agricultural societies recognizing and rejoicing this change of season. 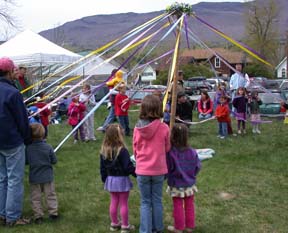 May Day is celebrated in the Northern Hemisphere each spring. It’s an astronomical celebration to commemorate one of the yearly four cross-quarter days.

Myths:
It was considered unlucky to allow anyone to take fire from one's house on May Day, as it would give power over the inhabitants.

• To ensure fertility in men, women, crops and animals, people would dance around Yew or Oak trees (later a May pole) hoping to instill the strength and virility of the tree god into themselves.

© Diane Chase, author of Adirondack Family Time: Tri-Lakes and High Peaks (Your Four-Season Guide to Over 300 Activities) for the towns of Lake Placid, Saranac Lake, Jay/Upper Jay, Wilmington, Keene/Keene Valley which is available online or bookstores/museums/sporting good stores. Diane is currently working on the third guidebook in the four-book series of Adirondack Family Activities.
craft holiday May Day