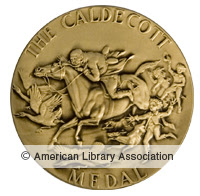 Congratulations to Jon Klassen on his 2013 Caldecott Medal for This is Not My Hat and Katherine Applegate for the 2013 Newbery Medal winner for The One and Only Ivan as well as all honorees!

Annually the Association for Library Service to Children, a division of the American Library Association, grants two prestigious awards on the children author/illustrator community, The Caldecott Medal and the Newbery Medal.

According to the American Library Association, the Caldecott Medal was named in honor of nineteenth-century English illustrator Randolph Caldecott. It is awarded annually to the artist of the most distinguished American picture book for children.  The Newbery Medal was named for eighteenth-century British bookseller John Newbery and is awarded annually to the author of the "most distinguished contribution to American literature for children."

So if you are looking for new and interesting books for your children and family, click below for the 2013 Caldecott and Newbery awarded books!

The 2013 Caldecott Medal winner is This Is Not My Hat, written and illustrated by Jon Klassen, published by Candlewick Press.
In this darkly humorous tale, a tiny fish knows it’s wrong to steal a hat. It fits him just right. But the big fish wants his hat back. Klassen’s controlled palette, opposing narratives and subtle cues compel readers to follow the fish and imagine the consequence.
“With minute changes in eyes and the slightest displacement of seagrass, Klassen’s masterful illustrations tell the story the narrator doesn’t know,” Caldecott Chair Sandra Imdieke said.

Creepy Carrots!, illustrated by Peter Brown, written by Aaron Reynolds and published by Simon & Schuster Books for Young Readers, an imprint of Simon & Schuster Children’s Publishing Division
Jasper the rabbit loves carrots until he notices they are everywhere. He is convinced they’re coming for him! Pronounced shadows, black borders and shaded edges enhance this ever so slightly sinister tale with a distinctly cinematic feel. This is one serving of carrots children will eagerly devour.

Extra Yarn, illustrated by Jon Klassen, written by Mac Barnett and published by Balzer + Bray, an imprint of HarperCollins Publishers
A selfish archduke threatens to halt a little girl's transformation of a colorless town and steal her box of magical yarn.  Klassen's innovative digital technique results in shifts of color that signal character change and critical turns of plot -all done with just the right stitches of humor.

Green, illustrated and written by Laura Vaccaro Seeger and published by Neal Porter Books, an imprint of Roaring Brook Press
In this original concept book, Seeger engages all the senses with her fresh approach to the multiple meanings of “green.” Using thickly-layered acrylics, word pairings and cleverly placed die cuts, she invites readers to pause, pay attention and wonder.

One Cool Friend, illustrated by David Small, written by Toni Buzzeo and published by Dial Books for Young Readers, a division of Penguin Young Readers Group
Energetic line and dizzying perspective combine for a rollicking tale of Father, Elliot and a highly improbable pet (or two). Buzzeo’s text, brimming with sly wordplay, earns its perfect counterpoint in Small’s ink, watercolor and pencil illustrations with chilly details and visual jokes that invite many repeated readings.

Sleep Like a Tiger, illustrated by Pamela Zagarenski, written by Mary Logue and published by Houghton Mifflin Books for Children, an imprint of Houghton Mifflin Harcourt Publishing Company
Surrounded with dreamlike images of crowns, ornate patterns and repeated visual motifs, her parents coax her into bed. Using mixed media artwork on wood enhanced with computer illustrations, this is a whimsical story with universal appeal.

The 2013 Newbery Medal winner is The One and Only Ivan by Katherine Applegate, published by HarperCollins Children's Books, a division of HarperCollins Publishers
Ivan’s transformative emergence from the “Ape at Exit 8” to “The One and Only Ivan, Mighty Silverback,” comes to life through the gorilla’s own distinct narrative voice, which is filled with wry humor, deep emotion and thought-provoking insights into the nature of friendship, hope and humanity.
“Katherine Applegate gives readers a unique and unforgettable gorilla’s-eye-view of the world that challenges the way we look at animals and at ourselves,” said Newbery Medal Committee Chair Steven Engelfried.
2013 Honor Books

Splendors and Glooms by Laura Amy Schlitz, published by Candlewick Press
Lizzie Rose, Parsefall and Clara are caught in the clutches of a wicked puppeteer and a powerful witch in this deliciously dark and complex tale set in Dickensian England, where adventure and suspense are interwoven into nuanced explorations of good versus evil.

Bomb: The Race to Build—and Steal—the World’s Most Dangerous Weapon by Steve Sheinkin, published by Flash Point, an imprint of Roaring Brook Press.
Balancing intersecting threads of scientific discovery, political intrigue and military strategy, “Bomb” is a riveting historical nonfiction drama. Sheinkin’s engaging narrative explores the complex series of events that led to the creation of the ultimate weapon and introduces many memorable personalities involved in the pursuit.

In the rich tradition of Southern storytelling, rising sixth-grader Mo LoBeau leads the eccentric residents of Tupelo Landing, North Carolina, on a rollicking journey of mystery, adventure and small-town intrigue as she investigates a murder and searches for her long-lost mother.