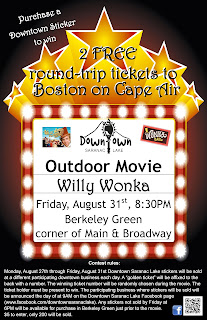 The final Downtown Saranac Lake movie night of the summer will be held on Friday, August 31, 8:30 pm at Berkeley Green.. This will be the 3rd outdoor movie held in Downtown Saranac Lake this summer. The first two films for the successful event were theWizard of Oz and E.T the Extraterrestrial.

Along with the movie, organizers announced a Golden Ticket contest where the winner will receive two complimentary round trip tickets from Adirondack Regional Airport to Boston on Cape Air.

Proceeds from the contest will be used for future Downtown Saranac Lake events and promotional efforts.

The participating business where stickers will be sold will be announced the day of at 9AM on the Downtown Saranac Lake Facebook page (www.facebook.com/downtownsaranaclake).

A “golden ticket” will be affixed to the back with a number.

The winning ticket number will be randomly chosen during the movie.
Ticket holder must be present to win.  $5 to enter, only 200 will be sold.