Into The Woods at Lake Placid Center for the Arts 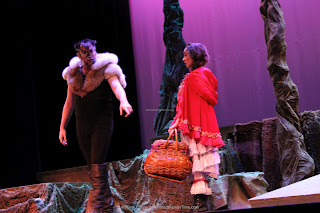 by Diane Chase
(as seen in the Adirondack Daily Enterprise)

Fairytales aren’t always for very young children and The Community Theatre Players are here to remind us in this year’s spring musical, Into The Woods. Held at the Lake Placid Center for the Arts, Into The Woods is not the sugarcoated bedtime fairytale but a story set to music that displays how our choices affects everyone around us.

The music by Stephen Sondheim and book by James Lapine intertwines various fairy tale stories such as Cinderella, Jack and the Beanstalk, Rapunzel, the Baker and His Wife, Little Red Riding Hood, Snow White and Sleeping Beauty. The play twists those familiar tales together as the characters journey through the woods to achieve their fairy tale ending. But, hold everything. That is only Act I.


The second act turns those fairy tales around while the characters explore such themes as infidelity, death, making choices, taking responsibility and consequences. That sounds grim, but it is all handled with balance and flair, as only a musical can accomplish. This year’s production is directed by Sunny Rozakis and showcases a variety of local talent.

Into the Woods first appeared as a stage production in 1986 in San Diego and moved to Broadway a year later. The play, writers and actors involved have won awards from a Tony to a Grammy. The original cast even reunited for a broadcast on public television.

Performances are May 18, 19, 25 and 26 at 8:00 p.m., with one 2:00 p.m. Sunday matinee, May 27. Tickets are $16.Adults, $14.Students and seniors. Tickets for the matinee performance on May 27 are $14 for Adults and $12 for Students & Seniors. Some theatres recommend the play for children 10 and older. The Community Theatre Players state that some material may not be suitable for very young children. As always, use your own best judgment. We are looking forward to joining our children  “Into the Woods” and discover the magic that is there. Though we may leave wondering who the bad guys really are.