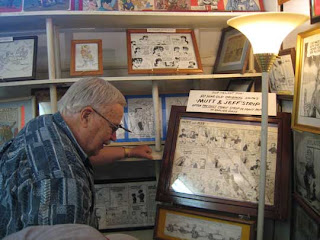 By Diane Chase,
(as seen in the Adirondack Daily Enterprise)

My family had the pleasure of going through Stan Burdick’s Ticonderoga Cartoon Museum before the collection was moved to Pittsburgh Toon-seum in 2010. We were given a rare treat; the founder and curator, Stan Burdick, was also our personal guide. As other guests came and went, Stan gave everyone the same level of attention.

This Saturday, April 14 at 7:30 p.m., Stan will be at Saranac Village at Will Rogers in presenting one of his many road shows based on what he knows best, cartooning.  After talking briefly with Stan he told me this particular show is good for people of all ages. As a storyteller, he will be using large cartoon storyboards or panels to help illustrate familiar and unusual poems. He gives two examples of poetry through the ages with “Casey At the Bat,” and “A Trial In New Amsterdam.”


Though there are some programs where he will draw cartoons while storytelling, for  “Tall Tales and Riotous Rhymes,” he will just use artwork he has previously created.

A political cartoonist himself, Stan contributed to many local newspapers during his career. His work has been selected numerous times for the annual publication, “Best Editorial Cartoons of the Year” and he won the New York Press Association Award in 1996 for an editorial cartoon on Eliot Spitzer.

Stan said he would try his best to answer any questions after the performance, but with only one hour and a lot of poems to perform, it doesn’t leave a lot of time.

So for any budding cartoonists or fans of cartoons, Stan Burdick’s show seems like a sure match. His enthusiasm for his subject matter and illustrating poetry through cartoons is met with the same intensity, as when he greeted guests at the Cartoon Museum, like he is everyone’s personal guide.

This event is free and open to the public. There will also be refreshments served.  Diane Chase is the author of the guidebook, Adirondack Family Time Tri-Lakes and High Peaks: Your Four-Season Guide to over 300 activities. For more family-friendly activities check out www.adkfamilytime.com.