Lake Placid Center for the Arts presents The Hobbit 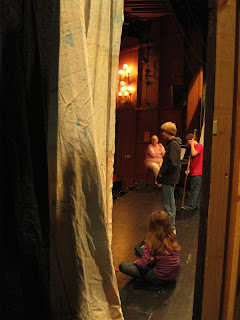 The stage is set for Gandalf and thirteen mighty dwarves to enter The Shire to enlist a reluctant Bilbo Baggins to help on a quest to slay the evil dragon Smaug. For those Tolkien fanatics, this musical version, though authorized by J.R.R. Tolkien, has a bit of a surprise ending. For those unfamiliar with Tolkien’s “The Hobbit,” this play with over 50 local children will be the perfect introduction.

“The Hobbit: or There and Back Again” was first published in 1937 by J.R.R. Tolkien and now promoted as a prelude to Tolkien’s most popular work “The Lord of the Rings” published seventeen years later in 1954. The book series has never been out of print. The books have been made into movies, cartoons, radio series, stage production and even a video game. 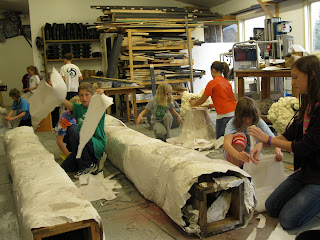 There will be quite a bit of talent on stage but I want to give a nod to those behind the scenes. As part of the Lake Placid Center for the Arts Afterschool Workshops, children were given the opportunity to work with Pendragon Theatre’s Bonnie Brewer and learn what it takes to create and build a stage set. This group worked afternoons making trees out of wire and paper and rocks from a can of spray foam. While other kids were learning their lines this group was learning how to reuse elements to make realistic looking sets that were easy to move and versatile.

Though I am not an obsessive Tolkien fan, I have read the books. I am not familiar with most of the characters. I don’t speak Elvish, but I still enjoy the theme of personal growth and of course good versus evil.

This version of The Hobbit is directed by Jessica Deeb and adapted for stage by Ruth Perry. The music is by Allan Jay Friedman with lyrics by David Rogers. The production can be seen this Thursday and Friday at 7:00 p.m. and Saturday (11/12) at 2:00 p.m. at the Lake Placid Center for the Arts. Tickets are $8/adults and $6/students under 18. Tenna’ ento lye omenta. (Until next we meet.)