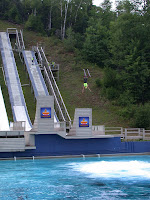 One of many wonderful things about living near Lake Placid is the quality and quantity of sporting activity my children are exposed to. I realize that contact sports are the American pastime but what about endurance sports and the philosophy involved in becoming the best that you can be.

I would like my children to see these Olympians, not as unattainable celebrities but as dedicated athletes. Wouldn’t it be nice for all children to have the epiphany that with hard work they too can accomplish anything?

This weekend, across the globe, participating cities will be hosting the annual event, Olympic Day, to celebrate the formation of the modern day Olympic games as well as encouraging fitness through the Olympic ideals, which are “Fair Play, Perseverance, Respect and Sportsmanship. “
Olympic Day is celebrated worldwide to commemorate the date, June 23, 1894, when the modern Olympic games were revitalized and the International Olympic Committee was established. Baron Pierre de Coubertin, founding member of the International Olympic Committee, is credited with almost singlehandedly resurrecting the Olympic Games after a nearly 1500 year hiatus.

The US Olympic Committee’s Lake Placid training facility and the NYS Olympic Regional Development Authority (ORDA) will present a fun-filled free event that is open to all ages.

There will be autograph signings with athletes (like Gold Medalist Steven Holcomb) from a variety of Olympic sports like biathlon, luge, bobsled, ski jumping figure and speed skating to name a few. There will also be an opportunity to “train with an athlete.” For example perhaps you want to try a wind sprint again Olympic Bobsled team member John Napier or check out the Freestyle Aerial Skiing trampoline training. The indoor refrigerated luge training start ramp will open at the USA Luge Headquarters as well.

My daughter is curious on how she can learn to do more tricks on our trampoline while my son sees this as an opportunity to practice biathlon. There are discounts and prizes, Wii games and tours. All that and still an opportunity to meet people who have found their passion and are dedicated to sharing it with others. Not a bad combination at all.