Be a Nature Detective: Alpaca vs. Llama 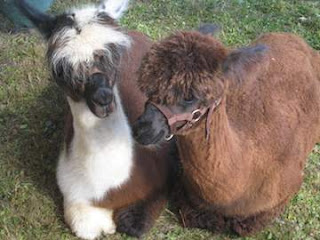 
What is the difference between an alpaca and llama? Well, there are quite few.

Though alpaca and llama are related (they're kissing cousins) the llama can weigh up to 3 times that of an alpaca. Alpaca and llama come from Peru, Bolivia, and Chile. Since they are a hardy breed many people in the Adirondacks breed them for a variety of purposes.


Alpaca are more timid while the llama are brave

You may see alpaca and llama in the same field because the llama will protect the alpaca. Llama serve as herd guards.

Llama's have a course fleece while alpaca's fleece is soft, fine and seen as hypoallergenic. Alpaca have been domesticated and breed for their fleece for thousands of years.

The two breeds can be interbreed but there is no purpose as the offspring would not be as strong as the llama or have as luxurious a coat as the alpaca.

Both llama and alpaca babies are called cria "cree-ah" and as a pack are called a herd of...


There are many farms in the Adirondacks that welcome visitors.