Be a Nature Detective: Toad and Frog 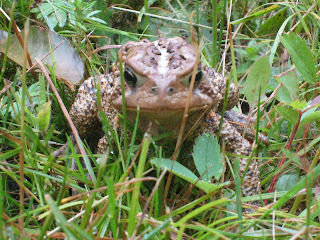 What is the difference between a frog and toad?

Well, one tastes a lot like chicken while the other has a bitter taste that wards off predators.

Neither will give you warts and even if you kiss one it still won't turn into a prince. Though you don't have to take my word on that last one. Go ahead... give it a try!

Toads are members of the frog family.


Both are cold-blooded (amphibians).  Frogs spawn (eggs) are laid in a cluster while toad spawn is laid in a line.


Frogs tend to spend more time in the water so they are smoother skinned with longer legs for swimming.  Toads' bodies are generally wider and bumpier. No, still can't give you warts though it does look like they have a bad case.

Frogs are a delicacy in nature, not just in the kitchen. They are a huge food source for many birds and animals so a VERY important part in the ecosystem. Toads secrete a bitter substance making them unpalatable.

Frogs/Toads eat insects so they helpful  in keeping the buggy population down.

Frogs/Toads have a two-stage life cycle. They lay eggs in water which hatch into tadpoles. The tadpoles swim in water, have gills and a tail, just like a fish. After weeks/months the frogs go through metamorphosis ( a dramatic change from one form to a completely different one as in caterpillar to butterfly)

Frogs/Toads breathe and drink from their skin (which is why they need to stay wet).

How to tell a boy from a girl? Look at his/her ears. Located right behind the eyes. If the eyes and ears are the same size, it's a BOY. If the ears are smaller than its eyes then you have a girl.

Male frogs are the only ones that croak. Probably discussing the Sunday game.
Frogs hibernate in the winter.

Froggie Fun Fact: A group of frogs is called an army!

FYI - the horned toad isn't even a toad; it's a lizard. Just when you think you have it all figured out!
frogs nature detective