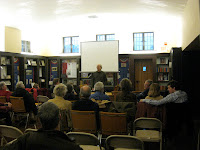 Ah, it is once again time to widen our classic film repertoire. For the 10th year the Saranac Lake Cabin Fever Classic Film Festival is back to introduce to some and reintroduce to others vintage films that impact the making of movies today. Films are carefully chosen and reflect a love for the genre. On Thursdays (with one Tuesday, March 22 exception) the series showcases either a drama or comedy.
Last year the Cabin Fever Film Festival veered from its traditional path to just show movie shorts. That format introduced my children into the world of Our Gang, Charlie Chaplin, Buster Keaton and others. Now I plan on widening my older child’s imagination into the world of Alfred Hitchcock. The bonus is each full-length film is kicked off with a movie short or cartoon.
The series opens tonight, March 3, with the 1959 classic Hitchcock film North by Northwest with Cary Grant as an advertising executive, a case of mistaken identity, spies and a cross-country pursuit. The iconic scene of Grant running from the crop duster and shots of Mount Rushmore should spark a memory with all .
March 10 will bring the 1939 film “Only Angels have Wings” back to the big screen. This time Cary Grant teams with Jean Arthur for a bit of romance, adventure and trickery.

All shows are at 7:00 p.m. at the Saranac Laboratory’s John Black Library, 89 Church Street. Tickets are $6 for adults, $5 for students/seniors, free/12- and under. Tickets are available at the door ½ hour before show time.


Since last year’s year film festival my children now are able to see these classic characters in other movies and how actors and directors have borrowed various material overtime. I even hear some “Three Stooges” from time to time. I can only guess that this Cabin Fever Film Festival will add the Duke’s swagger and drawl to our table.