It is the year of the Snake!

It’s the most important of Chinese holidays, kicking off a celebration that lasts for 15 days and culminates with the Lantern Festival. Each year is associated with one of 12 animals in the Chinese zodiac. For 2013, it’s the Year of the Snake.


Chinese New Year starts with the New Moon on the first day of the new year and ends on the full moon 15 days later. The 15th day of the new year is called the Lantern Festival, which is celebrated at night with lantern displays and children carrying lanterns in a parade.

The Chinese calendar is based on a combination of lunar and solar movements. The lunar cycle is about 29 days. In order to coincide with the solar calendar the Chinese insert an extra month every seven out of 19 years. (Similar in concept to the extra day in a Leap Year.) 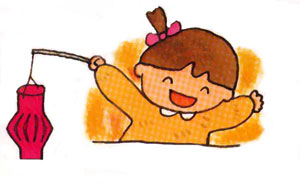 The celebration was traditionally a religious ceremony given in honor of the gods that watch over household and family ancestors. The rituals performed are said to united the living members with those who had passed away. The deceased are honored as it the past generations that is responsible for the foundation for the fortune and glory of the family.

Here is a great craft using a paper cup to make a chinese lantern and another one that uses a red piece of paper. Happy New Year!