• John Brown moved to North Elba after hearing about the work Gerrit Smith was doing providing land to freed African-Americans.

• Gerrit Smith differed from John Brown in one significant way, he was a pacifist.

• Gerrit Smith sold a parcel of his property to Brown.  At that time Smith was selling land to free African-Americans for $1/acre.


* Brown acted as a mentor/teacher to these free men but had a frustrating experience trying to farm the land around Lake Placid.

• John Brown and 21 followers (5 of whom were African-American) seized the armory at Harpers Ferry,VA (in what is now West Virginia) in hopes to capture arms to aid in their quest to end slavery. At that time this US armory was the second largest in the country. brought national attention to the emotional divisions concerning slavery.


According to the book "John Brown" by

William Edward Burghardt Du Bois, John Brown's final statement was "I, John Brown, am quite certain that the crimes of this guilty land will never be purged away but with blood. I had, as I now think, vainly flattered myself that without very much bloodshed it might be done."


• Gerrit Smith was one of the Secret Six, a group of supporters that help fund John Brown's raid on Harper's Ferry.


• The Unnamed Trail (1.2-miles) starts at the parking area and intersects the Ski Jump Loop to the NW or crosses to the east intersecting the Potato Field Loop

• Maple Grove (0.3-mile) can only be accessed from the Potato Field Loop in the southern sector.

• Potato Field Loop (1.8-miles) starts behind the farmhouse and barn and heads north looping back. This trail crosses private property so please stay on the trail

• Ski Jump Loop (0.8 mile) starts at the parking area and heads under the ski jumps toward the NW sector. It is a great place to run dogs off the lead. 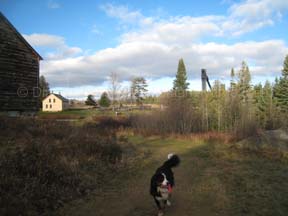 • Though dogs may run free without a lead, it is recommended by the DEC to stay on the trails near the ski jumps. As with anything else, keep the trails clean and make sure dogs are under control at all times.


• These wide open fields are a different topography from the usual Adirondack wooded trail. Have children look for seed pods during the fall, winter animal tracks in snow, buds in spring or flowers in summer.