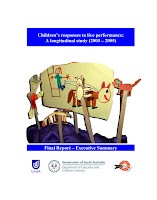 A 2006 South Australian study into arts education indicates that going to the theatre can improve children’s literacy and social skills. The Children's Voices study documented the impact of live theatre on 140 State Government primary school students over three years. It was conducted and jointly funded by the Department of Education and Children’s Services, The University of South Australia and Windmill Performing Arts.

In a prepared statement, author of the report and director of the study, Professor Wendy Schiller, Director of UniSA’s de Lissa Institute of Early Childhood and Family Studies Research Group, said the children’s response to live arts performance directly affected their learning and their lives.

“The most noticeable impact was the children’s marked gain in literacy,” Prof Schiller said. “Through writing their own stories, plays, poems, letters, scripts, diaries and posters, and reading critiques in newspapers, the children’s oral and written expressive language improved over the three years.”

While the children developed performance literacy, and learned the correct terms for people’s roles and responsibilities in live arts performances, they also became critically aware of what they were seeing.

“They learned to critique and express their ideas clearly, articulately and honestly,” Prof Schiller said. “And they applied these skills across related learning areas such as society and environment, and science and technology.”

School principals reported that the children showed more empathy and kindness as a result of their performance experiences.
educational inside activities live theatre Pendragon Theatre