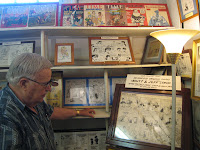 My children greet Stan Burdick, director of the Ticonderoga Cartoon Museum like he is the cable man and just offered free access to unlimited channels. They look at me like I am the only thing holding them back from nirvana. I brought them here. It is not the same thing as blankly sitting in front of a television though I stop short of telling them that. I shush them off making sure they carefully maneuver through the aisles.

This museum is the result of Stan Burdick’s 50-year collection of cartoon memorabilia. A political cartoonist himself, Burdick contributed to many local newspapers during his career. His work has been selected numerous times for the annual publication, “Best Editorial Cartoons of the Year” and in 1996 he won the New York Press Association Award for his editorial cartoon of Eliot Spitzer.

There is also a reference library of over 300 books if anyone has a moment to research any favorite comic strip characters. For us, Mr. Burdick manages to answer a seemingly endless array of questions.

We are even gifted with a tutorial of this particular art form that with all the ease of computers and scanning is still rendered by hand. Burdick explains part of the process and demonstrates with one of the framed 11”x14” originals from the collection. He shows how a political cartoonist has to be up on current events by reading newspapers and listening to the news, find the right concept, think up the caption, draw it, and “ink” the artwork. The original art is then reduced in size, scanned and e-mailed to the newspapers to be read by all. That is the simplified version.

I am not sure my children grasp how much work goes into each cartoon. They innocently ask if they can go back to reading and looking at the cartoons now. Gladly. We can fill them in later on the historical events that created the cartoons.

The Ticonderoga Cartoon Museum is located on the lower level of the Community Center on Montcalm Street. It is open Monday, Wednesday and Friday from 2:00 p.m. – 4:00 p.m. or by appointment. Please call 518-585-7015 or on the web at www.ticonderogacartoonmuseum.com.