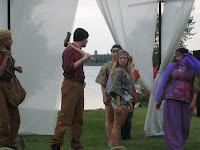 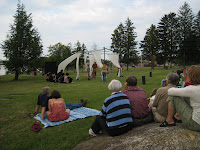 Puck or Robin Goodfellow is still up to the same old tricks, even some 400+ years later. Believed to have been composed before 1600, Shakespeare’s A Midsummer Night’s Dream, continues to be one of the most popular of the Shakespearian comedies.

My children listen to an audio CD so are familiar with the storyline but had yet to see it in performance. It is a physical romp around the Flander’s Park venue in Tupper Lake where actors utilize the whole park as a stage rather than being confined to a small space.
Modeled after other outdoor theatre venues, the 12 performances are free. The cost to the pocket is nothing more than, well nothing!
An added benefit, as far as I’m concerned, is no need to stand in a virtual e-ticket line like larger open-air venues such as the Central Park Delacorte Theater’s Shakespeare in the Park. There is nothing worse than standing in line whether virtual or real time. We get to walk right in and set up our blanket and chairs, spread out our picnic and wait for the show to begin.
The weather is perfect and the sun setting over Raquette Pond forms the perfect backdrop for the 45 minute performance. Oberon makes a charming lumberjack king while Puck manages to have more costume changes than my six-year-old. The snowshoes and bug netting are a nice touch as he back-flips across the grassy stage. The simple setting allows all of us to focus on the traditional dialog while enjoying a picnic.
Stereotypes abound, in my own household that is, as my daughter clasps her hands with joy over ever lasting love while my son grimaces with the mention of every kiss.
Shakespeare in the Adirondack Park is brought to you by the Adirondack Lakes Center for the Arts. For more information or other events please go to www.adirondackarts.org.
The last Tri-Lakes opportunity to see the play is at the Paul Smith’ VIC at 7:30 on Friday, July 31st. If that day doesn’t work I encourage you to make the journey tonight to Indian Lake’s Byron Park for the 7:00 p.m. show. Other performances are  July 31st at 2:00 p.m. at North Creek/ Hudson River Pavilion  or August 1st at 2:00 p.m. at Inlet Arrowhead Park and 7:00 p.m. at the Speculator Osborne Point.