Lake Placid Center For Kids: It Seams Like a Mystery 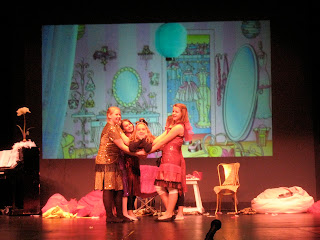 Perhaps you have not heard of the play “It Seams Like A Mystery” showing this weekend at the Lake Placid Center for the Arts (LPCA.) This play takes the meaning of children’s theater to a new level. Lake Placid High School sophomore Joan O’Leary wrote the production. Not her first foray into direction or play writing, the talented girl wrote her first play when she was only ten, and has continued to develop her passion for live theatre by continuing to write and direct original plays. From family plays to St. Agnes’s eighth grade production, Joan made the leap to the professional stage in 2010.

Last year my family was able to catch Joan’s first production at LPCA, “Odd Jobs & a Little Food Poisoning.” It was a playful romp and enjoyed by all, especially that it was written, directed, produced, acted and managed by children. 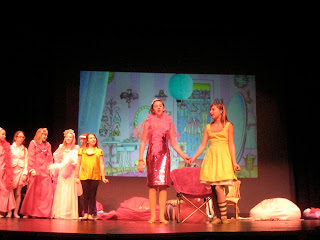 Like the Pied Piper, Joan has gathered a cast of 30 local elementary and middle school kids and a crew of high school mates including her classmate and stage manager Christina Stanon. Joan acknowledges that many people have helped her along the way. She points out that the whole staff at Lake Placid Center for the Arts has allowed her to present a professional play and assisted on the technical aspects while her mother and others have helped chaperone the young cast.
This year’s production is a musical about a seamstress and her daughter. When the Queen’s royal ball gown is stolen the daughter braves the castle halls to find the culprit and save her mother. Joan terms it as a “fun loving musical comedy with an 80’s flair where popular princesses parade the castle halls with wannabe knights-in-shining-armor with songs from classic musicals like Wicked, Mary Poppins and Westside Story.
If the weather outside is too cold then enjoy an imaginative treat where children do all the work. “It Seams Like A Mystery” will be showing at LPCA Saturday, February 5 at 4:00 p.m.  A donation is requested for admission. Please call LPCA at 518-523-2512 for more information. For more photos of the play, click here.