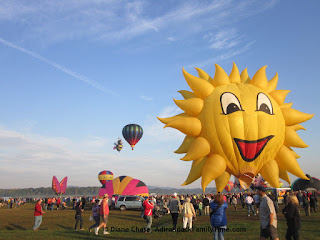 Sometimes my husband and I take turns doing something special with the children. We each need our own one-on-one time with our son and daughter. Each child also gets that special time with a parent where he/she doesn’t have to compete for attention. One such special event is the Adirondack Balloon Festival . Since we live outside of Saranac Lake, making the 5:00 am Big Balloon Breakfast at the Floyd Bennett Memorial Airport hanger in Queensbury was no small feat. The biggest challenge wasn’t so much the early drive but getting my son out of bed. He agreed much later on that is was definitely worth the trip. Touted as the oldest and largest hot air balloon event on the East Coast, the Adirondack Balloon Festival started September 22 and will continue through September 25.  On Friday, September 23, the event kicks off at 3 pm with craft vendors and live music at the Floyd Bennett Memorial Airport in Queensbury. Later that evening 80 balloons will take flight, includin
Post a Comment
Read more
More posts