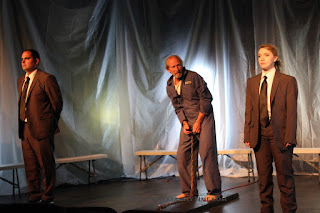 1984 is currently being performed on the Pendragon Theatre stage “He who controls the past, controls the future. He who controls the present, controls the past.” ~ George Orwell, 1984 Summary : George Orwell’s original book was written in 1949, after WWII. Michael Gene Sullivan’s adaptation of George Orwell’s 1984 brings to life a dystopian world where news is altered to fit the words of Big Brother and showing emotions, demonstrating love, and thinking against the establishment are all crimes.    Where : August 29, 30, 31, September 1,2 at 8 pm and September 3 at 2 pm. at  PendragonTheatre, Brandy Brook Ln, Saranac Lake   September 10 at 3 pm in Old Forge VIEW September 22 at 7:30 pm at Lake Placid Center for the Arts September 29 at 7:30 pm at Glen Falls’ Wood Theatre October 12 at TBD at  Plattsburgh’s Strand Theater October 14 at 7 pm at Blue Mountain Lake’s Adirondack Lake Center for the Arts. Winston Smith is shown his crime: owning a book and wr
Post a Comment
Read more
More posts