- March 14, 2017
Faugh a Ballagh! (Clear The Way!) is the battle cry of Irish Road Bowlers to make sure no one is hit by an approaching cannonball.

From green beer to corn beef and cabbage, some of the most popular St. Patrick’s Day traditions have very little direct connection to Ireland. Not to downplay the importance of dressing in green, parades and brined meat, but one fun tradition that has been practiced in Ireland for hundreds of years in the counties of Cork and Armagh, is the sport of Irish Road Bowling. 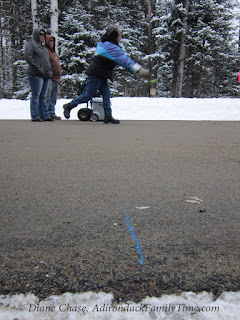 Originally known as Long Bullets, Irish Road Bowling's North American the road bowling history is a great deal shorter. The first American outpost of the Irish Road Bowling League was founded in 1996 in Boston, MA. Since that time there have been a small number of leagues founded in West Virginia and New York with non-official games sprouting up all over. As in all games, Irish Road Bowling has its own lingo where a road shower gives advice and you never want to break the butt.

A few years ago my Adirondack family decided to claim our Irish traditions, via family in Cork and being dabblers of green beer, with an afternoon of bowling in Indian Lake. We register as a family team and are handed a bullet, the official 28 oz. iron ball with an 18 centimeter circumference. It looks like a cannonball. Though it feels less like bowling and more like bocce, the energy is infectious. 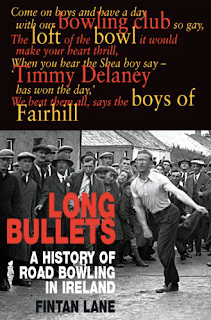 Fintan Lane's book Long Bullets: A History of Road Bowling in Ireland where he traces the history of the game that is believed to have originated in the Scottish Lowlands. The game spread to Northern England, Ireland and North America. Though no documents can be found to authenticate the claim, the road bowling belief is that the iron bowls were originally cannonballs.

Irish Road Bowling consists of teams of four to bowl an official 28 oz. iron ball from Point A to Point B down a country road for almost a mile. The team with the least number of bowls is the winner. There are no penalties and each team alternates bowls. Though most people show up with formed teams, singles looking for a place are fit into teams when possible. American rules allow for teams of four while traditional Irish Road Bowling is an individual sport.
The beginning chalk line is The Start and the Grip is how you hold the ball, which seems self-explanatory. Each individual or member of a team must run toward the start and with a quick underhanded throw, release of the bowl before reaching the dash. (What did I just say?)

My family is given a start time with a few other teams and we alternate bowls between team members. My daughter bowls first and is instructed by people along the sidelines to run to the throwing mark (chalk line) and release the ball.

The chalk line is a dash or butt so if you
“break the butt,” you've crossed the line in more than one way. After hurling the iron cannonball, your road shower or team member/helper may start handing out advice on how to perfect you next throw.


A shot or throw is to hurl the iron ball underhand without crossing the chalk dash (or butt) mark. Her ball doesn’t go that far and a mile course suddenly seems much longer. We mark her ball, similar to a game of golf, pick it up and wait for the next team to throw. 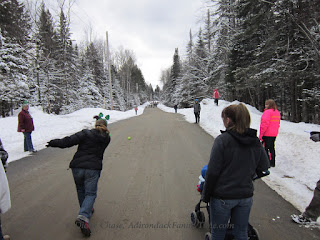 For my family the time passes quickly. By the end of the course, we are in a nice rhythm and manage some respectable hurls. Since the goal is the lowest score, we are clearly not the winners.

According to the West Virginia Irish Road Bowling Association  years ago a match or score consisted of each individual player given 20 shots and the person going the longest distance was the winner.

After my family’s first adventure in road bowling we decided to invest in a starter pack that has managed to make tours to Virginia, North Carolina and Rhode Island. I guess a person is never as popular as the toys they can share at a BBQ.

If you'd like to order your own set of Irish Bowling bullets, check out this North American Irish Road Bowling starter kit.