Summary: George Orwell’s original book was written in 1949, after WWII. Michael Gene Sullivan’s adaptation of George Orwell’s 1984 brings to life a dystopian world where news is altered to fit the words of Big Brother and showing emotions, demonstrating love, and thinking against the establishment are all crimes.

(Saranac Lake) It has been quite a few years since I’ve read George Orwell’s book “1984,” but its emotional rollercoaster still hits hard for my daughter and myself as we watch drama unfold amongst the minimalist set on the Pendragon Theatre stage. Its political statement is still the same. A warning to all to be mindful on the assault on personal freedoms can lead to restriction of individual thought.

We walk to our seats as Prisoner #6079 lays chained to the floor in the center of the stage as if we are the executioners waiting to hear his confession. My daughter glances tentatively at me. I’ve warned her this play is not lighthearted, but focuses on a world where emotions, individual thought, and opinion are against the law. A world where only the leader “Big Brother” is given the power to reason and decide. 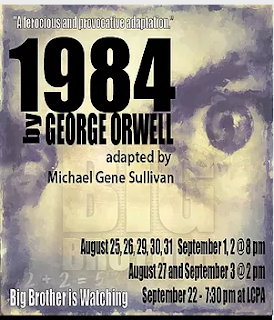 Director Mason Wager pulls a powerful performance out of each of his actors. Christopher Leifheit reigns as Prisoner #6079 Winston Smith. He channels a range of emotions from terrified, tortured prisoner to idealistic worker who questions why his job is to rewrite history to fit the dialog of his leader. He makes us feel each electric jolt and gut punch. Owning two books is an act of treason and his personal diary is the ultimate betrayal as he catalogs his disillusions with Big Brother.

Mary Olin Geiger’s scenic design reinforces the institutionalized arena of sameness. Industrial benches surround the Prisoner Smith and the Party members while the walls of opaque plastic are reminiscent of science experiences or haunted houses. Smith (Leifheit) is being asked to explain why he has been brought into the Ministry. His own written words are reenacted by Party members wiped of emotion, no longer capable of understand anything but what Big Brother tells them.
Though the set never alters, the ensemble team of actors shift us from past to present with lightning speed. Kent Streed’s costumes reinforce this colorless world by dressing each party member in similar grey suits and black shoes. It is gang mentality at its worse as each person quickly shouts for Hate Week, mindlessly changing alliances if Big Brother decrees it so.

Leslie Dame, Terry Kemp, Liv Paulson, and Brenden Gotham are masterful as they morph from bland, mindless interrogating party members to an antique dealer, young Smith and his lover or nosy neighbor and bratty kids. The diary drives the narrative as Smith is given shock treatment for each answer that he ignores the advice to “Be Precise” from the echoing overhead voice (Mark Mainville.) The audience does not know what is truth and what is Big Brother propaganda. My daughter whispers in my ear how Big Brother eliminates words to create an ignorant society and how hate is contagious. 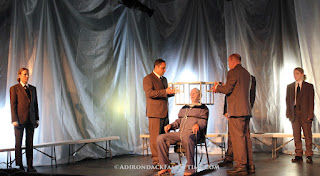 I won’t summarize the play, but I will say this. Carve out time from your busy schedule to see a performance. This play is not for the faint of heart, but it is a powerful, thought-provoking piece of art that is very relevant today. This action-packed play and the brilliant performance of each of its actors leaves us speechless. As we exit, we sit in our car and peel back the first layers, never really scratching the surface of this commanding piece.

*The show is not recommended for children under thirteen years of age.