August 12, 2016
(Saranac Lake) My children have grown up on classic radio plays. My son is familiar with a host of radio plays and characters such as Johnny Dollar, The Great Gildersleeve, Our Miss Brooks, The Jack Benny Show and all the sound effects that go along with them. He even knew the stories of the great detective Sherlock Homes and his faithful friend Dr. Watson before he could read or was allowed to watch TV. With that enthusiasm for classic productions, we were thrilled to find out that a version of a family favorite was going to be gracing Pendragon Theatre’s summer stage.

After a bit of research, I realize that the play we are seeing, Ken Ludwig’s Baskerville, is adapted from Arthur Conan Doyle’s The Hound of the Baskervilles but with a comedic twist. Ken Ludwig has written a hilarious play with odes to Mel Brook’s Young Frankenstein, a touch of Vaudeville and the wit of classic radio. Director Anita Montgomery pulls together a strong ensemble that hits all the marks and easily keeps the jokes tossing back and forth like a game of hot potato.

The set design from Kent Streed and Anita Montgomery is black box minimalist, allowing lighting and sound to play a more active role. This works wonderfully within this performance as the silhouettes, fog and even gun fire (blanks) add to the intrigue.

The play unfolds as Holmes and Watson are asked to probe into the death of Sir Charles Baskerville who has seemingly been frightened to death. Dr. John Mortimer (Michael Ring) seeks answers from Holmes regarding his friend’s death while he worries for the safety of Sir Charles’ American heir, Sir Henry.


For Sherlock traditionalists, like my son, Baskerville still has all the twists of intrigue and darkness, but with a shot of comedic adrenaline. Playing an iconic role like Sherlock Holmes is tricky, but Jonathan Whitney brings his own touch of class and grace to Holmes. Whitney is a stand out as he lobs and passes lines to Tyler Nye’s Dr. Watson in an elaborate game of catch. With a few exaggerated movements and subtle facial expressions Whitney pays homage to this classic character.

Tyler Nye’s Watson provides the perfect balance to Whitney’s Holmes. Each twitch and turn, shrug and cringe solidifies this naïve, enthusiastic fellow.   Without giving away the ending, Holmes and Watson attempt to solve the mystery of a mystical beast while meeting a cast of misfits from the London streets to the Devonshire moor.

Just adding another layer to the mix is a cast of 40 roles fulfilled by just three ensemble actors: Michael Ring, Matt Stapleton and Rachel Kemp. I lost track of the characters, dialects and costume changes that were pulled off by those three actors. What I do know is that these three actors were a comedic trifecta with their quick changes, accents and banter. Kent Streed’s wonderful costumes ease the transition between the numerous roles while Bonnie Brewer’s lighting creates the perfect atmosphere from eerie fog to shadowy street.

It is wonderful to see Kemp’s comedic chops finally put to the test.  Most recently seen in Pendragon’s Amadeus and Around the World in 80 Days, in Baskerville Kemp confirms she is able to stretch herself well beyond the role of damsel in distress. She shape-shifts from the elderly Mrs. Hudson to the beautiful Miss Beryl, an opera star, a baby to Baskerville’s housekeeper Mrs. Barrymore (reminiscent of Young Frankenstein’s Frau Blücher). I’ve probably forgotten a few, but she breathes life into each part and holds her own against her cohorts in crime, Stapleton and Ring.

Matt Stapleton and Michael Ring are both making their Pendragon debut with Baskerville and watching them on the stage is a gift. Stapleton is superb as he easily flips from American heir-apparent Sir Henry to Inspector Lestrade. At one point he even plays dual roles at the same time without skipping a beat.  He fills the stage as the boisterous Texan while managing to keep a balance between a variety of smaller parts. 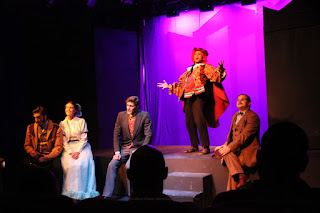 Ring is brilliant as he switches from street urchin to eccentric naturalist Stapleton or hotel bellhop to Baskerville servant Barrymore.  Ring is a contortionist, molding each new part through fluid body movements, dialects and rapid fire lines.

Is it a supernatural curse? Is it murder? Only Sherlock Homes knows. So put on your herringbone hat or leave it behind, but make sure to join in the shenanigans for this cleverly twisted “whodunit” thriller.