August 29, 2016
(Saranac Lake) I’ve only read Tennessee Williams’ play The Glass Menagerie and now after seeing Pendragon Theatre's latest offering, I am wondering why I’ve waited so long to see this performance. Perhaps I was just waiting to see this stellar performance directed by Pendragon Theatre Executive Artistic Director Karen Lordi Kirkman. Pendragon Theatre’s The Glass Menagerie is a heartbreaking tale of family strife and desperation. Kirkman has brought together a fantastic cast and crew that has the audience giggling one moment and gasping the next while taken through Tom’s memory of his flawed family.

The four-character play is told from the past perceptive of Amanda’s son Tom Wingfield (Miles River Willow) as he relives a memory when he struggled to become a poet while working at the local shoe factory. Tom steps into the action as his memory comes to life.

Tijana Bjelajac’s clever set allows the actors to change scenes through their action. A loading dock morphs easily into the Wingfield’s parlor with a few shifts of metal boxes.  The set reinforces that this story is Tom’s selective memory where certain elements, like the dining table or glass menagerie is represented in color with exact details while other segments are colorless, vague and unimportant.

Willow (seen in Pendragon’s Arcadia and Seagull) plays Tom with all the bitterness of a man trapped in a life of obligation. While out for a night of movies or drink, Tom uses every excuse to escape his family. With shoulders curled and fists clenched, Willow drives home the disappointment of a life unfulfilled. While his own father has taken off to parts unknown, Tom is left to take care of his mother and invalid sister. His mother Amanda Wingfield (Beth Glover*) is a genteel southern belle regaling her children about an exaggerated past filled with “17 gentleman callers” and how their father was a disappointing choice.

Beth Glover as Amanda is brilliant. Glover, most recently seen in the Broadway national tour of Cinderella as the Wicked Stepmother, pulls from her own Mississippi roots to fill the stage with southern charm as she wages a last ditch campaign to marry off her recluse, shy daughter Laura (Liv Paulson). Glover draws the spotlight to her with each drawl whether she purses her lips in disappointment or clasps her hands in childlike glee. Amanda’s children are her life and when Laura fails at business school, Amanda feels the only security left for her daughter is marriage.

Kent Streed’s costumes accentuate the personalities of each character and the family’s limited funds. Kent adds subtle touches like Amanda’s worn shoes, Laura’s oversized sweater and Tom’s working class clothes to drape them all in desperation.

Laura is overshadowed by her mother in every way. Liv Paulson is small compared to the taller Glover and uses her stature to further emphasize the domineering nature of the mother/daughter relationship. Paulson’s Laura limps across the stage and meekly hides behind the imaginary world of her glass figurine collection. She is as fragile as her glass collection. Tom and Laura use different techniques to defy the dominating Amanda while supporting a delicate family balance.

Tom manages to do something right, in the eyes of his mother, after inviting a co-worker, Jim O-Connor, back to the house as a possible suitor to Laura. Amanda pulls out all the southern hospitality in the hopes that new cushions and a roast will cure their financial woes. Unbeknownst to all, Jim O’Connor is Laura’s high school crush and that revelation comes with consequences.

O’Connor, played by Dylan Duffy, has a small but pivotal role. Duffy’s O’Connor seems at first to be a brash young man, but we are able to see him as more Tom’s conscience as the story unfolds. Tom uses the electric bill money to join the Merchant Marines so he can leave and find adventure while O’Connor questions his integrity. Duffy’s expressive face also lets the audience in on the joke when O’Connor realizes he is being set up with Tom’s sister.

Without giving away the ending, this story has elements that will resonate with everyone, where memories are flawed and actions are picked apart and questioned. When the lights finally go up we are exhausted and invigorated from this trip down memory lane.

You won’t want to miss this one. Get your tickets to Pendragon Theatre to watch Tennessee William’s The Glass Menagerie while they are available. This show will sell out. Glover is a gift that I hope continues to grace the Pendragon stage for years to come. Enjoy! 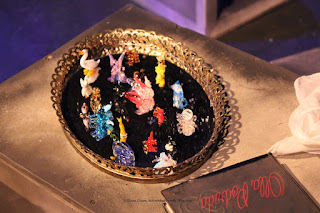