January 13, 2016
Lake Placid may be known for hosting two Winter Olympic Games, but currently Lake Placid is in the spotlight for being one of three United States cities sending a group of young students to participate in the International Children's Games in Innsbruck, Austria.

The International Children's Games originated from Slovenian sports instructor Metod Klemenc's idea to create a better world based on friendship. After World War II, Klemenc wanted to help unite the world through its young people from different countries using sports as the equalizer.

This international multi-sport event is targeted to children aged 13 to 15 years by invitation only. Nine countries participated that first year, 1968, Since that time 49 summer games and six winter games have taken place with over 45,000 participants from 580 cities from all five continents. 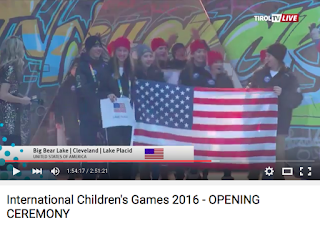 In order to qualify for the International Children's Games each athlete had to be nominated by their coaches as well as receive recommendations from community members. Each athlete submitted an application and wrote an essay about how they would share their Innsbruck Games experience with their community.

View a video of the opening games: The USA teams enter at around 1:53. Enjoy!